A note which is tacked on a bulletin board in the Office. It depicts three forms of the character Care, a major focal point in the web series.

On Petscop's pause menu, there is a seemingly unused option called "Book of Baby Names". During most of Paul's gameplay, selecting this option does nothing.

In Petscop 24, the book is finally accessed. Just as it says, it contains an alphabetical list of names, including Belle, Carrie and Mike, along with their assigned meanings. The book also contains a birthday message for Mike.

In Petscop 16, the game displays a rather urgent message when no controller input is detected for a very long time. It periodically shows this screen which depicts a "ghost room" / "testing room", a red 'blip' and a gauge. The blip moves around near the end of Petscop 16, seemingly functioning as a local tracking device.

In Petscop 23, Paul reveals to Marvin that he is physically in the room depicted here, a decision Paul would quickly regret.

This camera near the Windmill is directly above where Tool is under the Newmaker Plane.

It is initially set to aim at the Windmill (or at first, its base), but Marvin turns it around in order to play an odd cutscene in Petscop 6, causing it to turn red and lower in height.

In Petscop 20, it's revealed that Marvin has access to the camera's controls. There doesn't seem to be a hard limit as to how high or low the camera can go.

Certain objects in the Petscop video series are edited out in a likely attempt to keep "their content private".

Petscop 20 reveals that 4 of these items are likely Caskets.

Petscop 20 contains a showcase of four Caskets, during one of Marvin's auto-saved demos. They are located in a now-inaccessible part of the Road Map.

These four Caskets may very well be the censored objects seen through the series. They all incorporate the color red in some way. 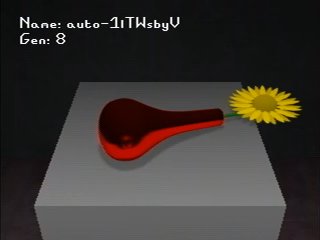 A red vase with a yellow flower sticking out. Care's blurry reflection can be seen on it. 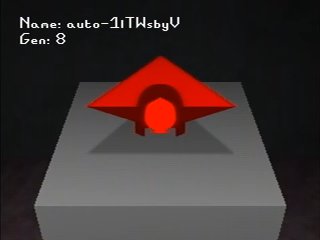 A large, red tetrahedron with Care's head superimposed onto it. 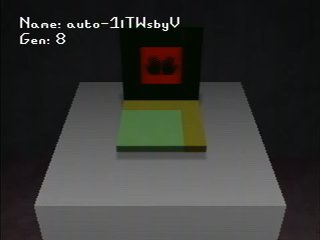 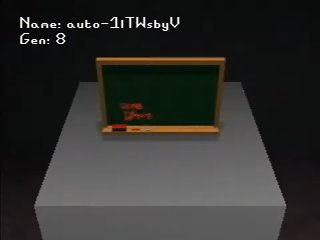 A miniature chalkboard with five words written on in red chalk. The words aren't legible, but they are the same ones briefly seen in Tool's Room, written on a piece of paper taped to the wall.

A 40-tick combination lock that appears on one of the lockers in the school's first floor.

Petscop 23 reveals the combination used to disengage the lock. The locker contains a purple and pink-striped Easter egg and a "new life letter" from Tiara Leskowitz.

This locker appears to be a place for storing Easter eggs, generated from the Machine in the school's basement. It uses the same drop-off mechanics as the Child Library kiosk.

At seemingly arbitrary points in the Petscop series, the videos show in-game demos, which function as a kind of "attract mode" like in DOOM and Quake. Playstation titles usually had a "demo mode" to show snippets of gameplay if the player had not pressed Start at the title screen.

The January 2019 YouTube channel description says that the Recordings have an ability to "raise the dead" in some manner. Whether or not this is a figure of speech is unclear.

There appears to be a difference between "Demos" and "Recordings".

Demos are Recordings that are randomly selected by the game while waiting at the title screen. Petscop 14 reveals that the Demos depict alternate variations of certain levels, allowing the player to access areas that are normally closed off. This gives off the appearance that the Demos are being tampered with somehow.

For instance, Paul tries to access a room in the House by walking into a closed door. At the same time, his gameplay is being recorded. When the Recording is played through the title screen as a Demo, the door is actually open. He goes through this door and enters this room, but on his end, it looks like he's butting against the door.

Recordings are raw, unedited sequences of gameplay and controller inputs. They are not to be confused with video recordings (e.g. footage of the game that Paul showed to his friend initially). An earlier description on the Petscop YouTube channel specifies that the uploads are "recordings in video format".

In Petscop 17, a direct method of accessing Recordings is revealed through the game's Sound Test.

I have compiled a list of Recordings, along with their locations and "Gen." values.

Room Impulse is a hidden game mechanic that was revealed in Petscop 17. While it's active, one can watch several Recordings at the same time, using the "Burn-in Monitor" gauge to track an individual session. The word 'impulse' implies that one can use this mode to influence some aspect of these recordings.

This option shows a collection of historical sprite sheets for many in-game characters and unused 3D models.

An easel which can be painted on in order to access a specific child's room within the Child Library.

There are exactly 288,000 possible combinations based on all the face components available to the easel. Assuming each face is valid, it would take about 5 and a half years to view all of them in sequence (minus the time it takes to input each face).

After Paul finds a very unorthodox way to access the Parent's Room in Petscop 14, he unknowingly activates an array of 15 framed pictures of an optical disk.

When a picture is selected, a "suspense" sound effect plays and a simple 3D model of the picture frame zooms into view. These pictures can be rotated left or right. A picture in the middle of the array makes a higher-pitched sound than the others, and also glows blue when it's selected.

Later on in the same episode, after Paul retrieves the key to the house's Garage, he is able to directly observe what he was doing with the pictures earlier. This time, all the pictures are completely black.

The exact purpose of these pictures, as well as their in-game function remain unknown.

Behind the GiRL picture in the School's second floor is the counselor's room. Upon entering this small room, the typical School music stops and is replaced with a periodic metal-screeching noise. There are two wooden chairs, a table and a cabinet which holds four board games and a green hat.

One of the games, Graverobber, is shown in Petscop 22. The other three are Checkers, Rotation and Accident. The Accident game shows the same interlocking shapes seen outside Tool's room.

These games may be metaphors for certain Petscop game mechanics, as Graverobber resembles the Newmaker Plane, involves the Windmill and finding graves.

This 3D-rendered image of a girl wearing a green hat appears in the School's second floor. When the player approaches it in Petscop 15, refrigerator magnet-looking letters float around which spell out the word "GiRL" while a short, looping jingle plays. The image seems to be a component of a puzzle within The School.

In Petscop 22, Paul manages to clip through the normally-solid image and access a hidden counselor's room.

The Machine is a large contraption made out of green rotors and a Child Library kiosk. As Tiara briefly explained, it needs 1,000 Pieces to operate. When Paul enters the Machine Room, someone has already supplied the first 500 Pieces to the left side of the Machine, suspended in the air.

The main function of the Machine seems to be converting human Pets into other things using the Needles Piano as a control mechanism. The Machine is central to whatever Marvin's plans are, as he seems to want to use it to achieve a specific output. Using the kiosk, Paul deposits Care B as the Machine's input.

In Petscop 23, Paul's attempt at playing the Needles fails, causing the output to be a yellow and red-striped Easter egg, and making Marvin run out of the room.

The Needles Piano is a musical instrument that is played in Petscop, represented by a spinning, purple-striped tetrahedron.

In Petscop 11, Marvin instructs Paul to play the Needles in the School's first classroom to make a "baby" become "melody". This room's loading screen depicts what appears to be a modified piano with a PlayStation gamepad mounted within a ring.

Additionally, in Petscop 12, a voice that talks to Belle says that it played "the second movement of Stravinsky's Septet (wikipedia.org) on the Needles" Incidentally, a portion of this song is played during Petscop 7, in Quitter's Room.

In Petscop 15, Tiara instructs Paul to "Press Nifty" using the controller plugged into the first port. This code activates Draw Mode and causes a VRAM (en.wikipedia.org) editor to appear, allowing Paul to make crude, local edits to textures in the game's framebuffer.

The only textures available to Paul using this method (so far) are the ones in the School. When edits are made to textures in this mode, they persist after exiting the editor. This means that when Paul writes "Hi" on the chalkboard texture, "Hi" appears on every other instance of the chalkboard in the School's first and second floors.

The particular reason why Tiara revealed the code to Paul, and the practical use of this editor in-game are currently unclear.

Tiara may use a variant of this editor to deliver her written messages, considering the pink color of the "ink", and her distinctively angular writing style.

A note that came with Petscop which reads as follows:

We're not as concerned about these things now.

Please enjoy the recordings! We do. :)

Pieces are small, collectible shapes that act as the player's score. 1,000 of these pieces are required to access the Machine in the School's basement.