The somewhat jaded, mumbling narrator who uploaded a series of videos for his friend to see. He is likely the creator of the "u/paleskowitz" Reddit account, which brought Petscop to the Internet's attention.

His full name may be "Paul Leskowitz", according to the above info and Petscop 23.

His YouTube channel was transferred to an unnamed "family" who encourage him to produce more recordings of the game. He claims to be intimidated by this family.

Paul is somehow directly involved with the events in Petscop, although it isn't clear as to exactly how.

A yellow, armless monster. He is the default player character.

The unofficial name "Naul" was used by fans of the series before Petscop 18, where its internal name, 'guardian' was revealed. A running joke is that he is unable to open doors, likely due to his lack of arms. It's not yet known what he is supposed to be or represent.

A heavy obsidian ball with ruby-colored eyes, an outstretched tongue and a green hat.

Amber is kept in a cage in her room. To catch Amber, the player needs to trick her by locking themselves in one of the cages.

A legless, vaguely humanoid figure with six fingers on each hand, carrying a white pearl.

Pen is found in her room, along with a large floor piano and a treadmill-operated counter which is used to tune it.

A red flower that blooms and burrows around EC-7. Its health is sustained by Wavey, who provides water for it. It has a friendship with Toneth.

An amalgamation that has Toneth's head atop a weird stem-like body.

His room can be used to trigger a cheat code which reveals the much larger Newmaker Plane portion of the game.

Petscop 13 reveals that Roneth is Toneth's baby half-brother, and that capturing him is possible - pushing the bucket from EC-7 underneath him will make him fall into it.

A red bird with a broken leg. He has a friendship with Randice. Toneth was not intended to be captured in Even Care, and his description was not properly implemented. For some reason, his icon depicts him with no legs at all.

Toneth is captured in the Newmaker Plane after a strange cutscene with "Shadow Monster Man" Marvin.

A raincloud with an odd look on its face. It keeps Randice from wilting by raining on it.

Being a cloud, Wavey is vaporous, and can take a liquid form and fit into any container that can hold water.

It was previously known as "Cloudsworth" by the Reddit and YouTube following before Petscop 6, where its real name was revealed. 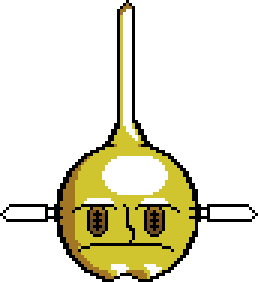 A very strange, yellow apple-like creature with a large appendage sticking out of its head. It has an amusingly unimpressed expression on its face.

Hudson was first seen in Petscop 18, in one of the historical sprite sheets. He hasn't been seen in the proper game yet. 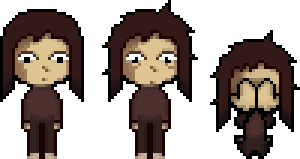 A young, brown-haired girl who (for some reason) takes 3 forms, all human Pets. Care was kidnapped by her father, Marvin, and went missing following an unspecified emergency.

Care A looks normal, B has messier hair and gaunt, baggy eyes, and NLM is distraught, kneeling with her hands over her eyes, sobbing. She is likely traumatized or mentally damaged due to the vague events recounted in Petscop.

In Petscop 14, an in-game sequence happens where Care bumps her head on the door to her Parent's room. After Paul examines the framed pictures on the side table drawer, she rambles about a disk and "discovery pages" to the confusion of her mother, Anna. This dialogue is very out-of-character for someone Care's age, as she tells her to "stop fucking ignoring" her, mistaking her for Jill, her aunt.

It's implied that she suffered facial damage due to the bump, judging by the signs outside of the House, and a comment made in Petscop 22.

Her proper name, Carrie Mark, and her date of birth (November 12, 1992) are revealed in Petscop 17. She is either 4 or 5 years old, assuming that this particular depiction is from 1997.

Carrie's name is listed in the Book of Baby Names, having the meaning "Dizzy". 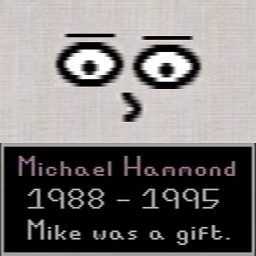 A 7-year-old boy who died in 1995. His exact identity, cause (and manner) of death and relevance to Petscop remain a mystery. He is hardly mentioned in the series at all, save for his in-game gravestone and a passing comment by Rainer.

Petscop 24 shows a message from Anna, his aunt, for his 7th birthday. Many kids were invited to his birthday party, apparently.

Mike's name is listed in the Book of Baby Names, having the meaning "Painter".

Marvin is Care's father. His in-game character has the same body as the Guardian, but has a nondescript green face. In one loading screen, he is shown to have an angry expression, beady eyes and no mouth. For some time, the only Pet he caught was Toneth, before giving him to Paul in Petscop 6.

He is seen kidnapping Care A in Petscop 11. Apparently, his name cannot be typed using the gamepad language because there is no word in the English language that is a homophone of "Marvin".

Marvin was kicked out of his house by his wife, Anna.

Jill is Care's aunt. In Petscop 14, Paul can be heard saying that he needs to call Jill after seeing a harrowing text dialogue that mentioned her name.

In Petscop 22, Paul asks Belle if she recieved a call from Jill, noting that he passingly mentioned her name.

Rainer is assumed to be a lead developer of Petscop.

Rainer has a noticeable disdain for Marvin, probably due to his mistreatment and kidnapping of Care.

An older description on the Petscop YouTube channel says that Rainer gave Petscop to the Family as a Christmas gift in 1997 and 2000. He was thought to be dead for a long while.

In Petscop 11, Paul mentions that he met Rainer at a birthday party as a "tiny kid", and that he was with all the other kids in a basement playing video games. It is possible that Rainer is Michael Hammond's older brother, given the information in Petscop 24.

The ominous smiling face in Quitter's Room that appears on the opposite side of the mirror wall. Belle would have become Tiara if she hadn't "given up halfway". She apparently speaks through a bright pink variant of Tool, seen later in the series.

Before Petscop 15, she was named "Quitter" by the Petscop Reddit community, both refering to Quitter's Room and the verbal taunts which were used on the real-life Candace Newmaker.

The exact identity of this character is unclear. Tiara corrects Marvin about her name in Petscop 15, saying that she isn't Belle.

Given the information from her "New Life Letter" in Petscop 23, Tiara Leskowitz may be a mother-figure to Paul. Petscop Soundtrack reveals that both Tiara and Lina were involved in smuggling Paul away as a baby.

According to Petscop 22, Belle is Paul's friend, and the person whom he was talking to in the initial Petscop videos. Paul draws on Belle's "puzzle genius" so they can find more secrets in-game and (apparently) real life.

Belle's name is listed in the Book of Baby Names. Her name is assigned the meaning "Smart", owing to what Tool said about Tiara in Petscop 5.

A (supposedly) deceased female who is involved with Marvin, Care and the Windmill's disappearance.

One of Rainer's notes say that both she and the Windmill disappeared, but she was reborn as Marvin's daughter, and Anna, his wife, is aware of this.

The face that represents her is very similar in appearance to Care's.

Lina is very likely Paul's true mother, according to Petscop Soundtrack. Lina, Tiara and Paul all share the same surname, but where Tiara fits into this family is unclear.

If Anna is Lina's sister, that would make Anna Leskowitz her maiden name.

A scene near the end of Petscop 14 recounts a dialogue between her and a disoriented Care.

In Petscop 24, the Book of Baby Names contains a message for Mike, congratulating him on his 7th birthday and mentioning a gift that Carrie helped pick out for him.

Thomas is Care's uncle, according to Petscop 17.

Daniel is Care's cousin, according to Petscop 17. 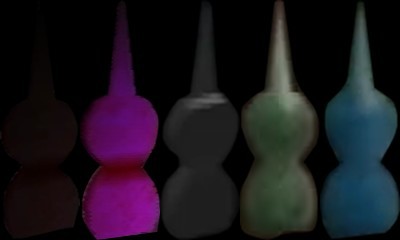 A strange monolithic contraption that "talks" in writing.

There are different 'tools' which have different colors, and two of them have distinct writing styles. A large red one in Tool's Room seems to be some kind of medium that Tiara/Belle can "speak" through.

A recurring name that strongly suggests a link to the real-life Candace Newmaker. The exact nature of "The Newmaker" as a character is unclear.

Guardian/Marvin after preforming the "turned the right" glitch in the Graveyard, turning them completely black. Performing this glitch is required to access the Windmill.

A theme of turning things black is seen throughout Petscop, with the Frozen House and Teal Tool being blackened with paint.